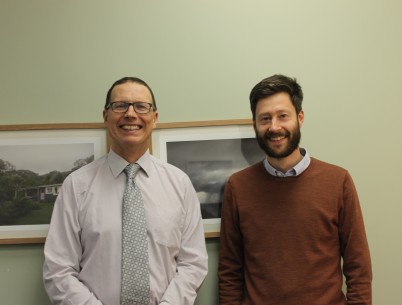 A New Zealand-led study that found patients with mild asthma are much less likely to have a severe asthma attack if they use an inhaler containing a combination of both preventive and reliever medication as needed has seen two Wellington-based researchers awarded the Health Research Council’s prestigious Liley Medal.

Professor Mark Weatherall (University of Otago, Wellington) and Mr Mark Holliday (Medical Research Institute of New Zealand) are both senior researchers on the Novel START study and were presented with their Liley Medals at the Royal Society Te Apārangi’s Research Honours ceremony this evening.

The study was the first to show that taking a combination inhaler as needed reduced the risk of patients with mild asthma having a severe asthma attack over those using the preventer inhaler each day plus a reliever by more than 50 percent, with 4 out of every 100 patients experiencing a severe attack in the combination group compared with 9 out of every 100 patients in the preventer plus reliever treatment group. It was also the first study to show that using the combination inhaler treatment as needed reduced a key marker of inflammation in patients’ airways, indicating that the treatment acts as an anti-inflammatory reliever therapy.

HRC chief executive Professor Sunny Collings says this groundbreaking study, which was supported by the HRC through Independent Research Organisation funding and by AstraZeneca through an externally sponsored research grant, has had an almost immediate impact on guidelines for treating asthma in the clinic. She says it has been referenced in both the international (Global Initiative for Asthma) and New Zealand asthma guidelines as key evidence for supporting a change to the standard treatment for mild asthma.

“The Global Initiative for Asthma guidelines have stated that these findings are the most significant paradigm change in asthma management over the past 30 years. This is an outstanding achievement by Professor Weatherall, Mr Holliday and the whole Novel START team and shows just what an impact investment in New Zealand health research can make,” says Professor Collings.

Professor Weatherall says the study focused on mild asthma rather than moderate or severe asthma because most asthma attacks in New Zealand occur in patients with mild asthma and there is a distinct lack of research in this area.

“Although people with severe asthma are more at risk of having an asthma attack, there are more people with mild asthma, so the health system consequences of finding effective treatments for this mild group are significant. Also, it’s tricky to define severe, moderate and mild asthma. People labelled with mild or moderate asthma might have severe asthma if you follow them over a period of time, particularly because the disease fluctuates both seasonally and with other infections. So ‘mild’ asthma might not actually be that mild,” says Professor Weatherall.

Previous research and clinical practice has shown that patients with mild asthma have often not been getting the recommended treatment in the guidelines for a variety of reasons, including their GPs not prescribing it or the patients not wanting to take a preventive inhaler twice a day when they don’t have any symptoms.

Mr Holliday says these findings will not only help prevent patients with mild asthma from having a severe asthma attack, but will also enable them to take more control over their treatment.

“Because the preventive and reliever medication are combined in a single inhaler, people are able to self-titrate their medication needs as their condition worsens. This means that the inflammation in their airways automatically gets treated when they take additional actuations from the combination inhaler, helping to prevent the development of a severe asthma attack,” says Mr Holliday.

“Not only does this lead to fewer courses of oral steroids, but we also found that patients from the combined inhaler group used about half the inhaled dose of steroids as those from the regular preventer group.”

Professor Weatherall and Mr Holliday say the success of this research was a huge team effort across multiple centres. In the future, they plan to build on this work by looking at the use of a combination preventive and reliever inhaler for children and across all severities of asthma.