Study leads to global rethink of how to prevent fractures 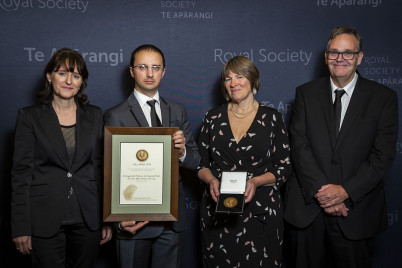 A team of New Zealand researchers have been recognised for their groundbreaking paper that could help reduce the number of older women presenting with fractures by up to half.

Distinguished Professor Ian Reid, Dr Anne Horne and their team at the University of Auckland were tonight presented with the Health Research Council of New Zealand (HRC) Liley Medal at the Royal Society Te Apārangi Honours event for their significant medical breakthrough, which has led to a global rethink of how to prevent fractures in older people.

The paper, published in the prestigious New England Medical Journal in December 2018, showed that giving the drug zoledronate to older women who have low bone density could reduce fractures in this group by between 35 and 50 per cent, depending on the type of fracture. The team’s HRC-funded study involved a six-year clinical trial of 2000 New Zealand women with low bone density, a condition known as osteopenia.

“A previous trial programme that we were involved in established that zoledronate is effective in preventing fractures in women with osteoporosis, which is the most severe form of bone loss. However, our team have now shown that it could also prevent fractures – and ultimately halt the progression to osteoporosis – in the much larger group of women with osteopenia,” says Distinguished Professor Reid.

One out of six women will have osteopenia at age 55. By age 75, this number will have jumped to half of all women.

“Fifty per cent of women have a fracture between menopause and the time of death, and 80 per cent of these fractures occur in women with osteopenia. Giving zoledronate to this group of women every 18 months to two years could be a game-changer and significantly reduce New Zealand’s total fracture burden,” says Distinguished Professor Reid.

Dr Anne Horne, who led the clinical trial side of the study and received the Liley Medal on behalf of the team, says they also found that the women who took zoledronate reduced their chances of having a heart attack or getting cancer by about one-third.

“We know that some cancers spread to bone early in their course, so having zoledronate coating the bones may prevent these cancer cells attaching to bone and establishing themselves there. We also think that zoledronate may bind to the calcium plaque in blood vessels, stabilising them and preventing the progression of arterial wall damage so that people suffer less heart attacks,” she says.

HRC acting chief executive Dr Vernon Choy says with the number of people in New Zealand aged 65-plus projected to double from 2016 to 2046*, the need to reduce fractures has become a pressing national health, social and economic issue.

“Ian and his team’s influential paper has led to an ongoing international re-examination of who should be offered anti-fracture medication and it will, over time, likely result in more New Zealanders being offered successful interventions to slow bone loss and reduce their risk of sustaining a fracture,” says Dr Choy.