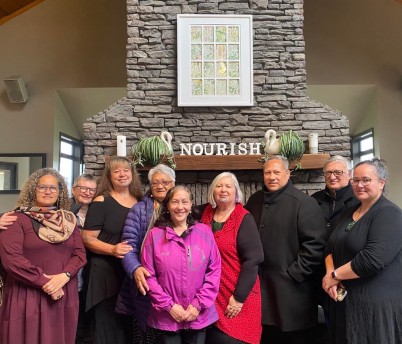 Dr Tess Moeke-Maxwell (fourth from right) with some of the Te Ārai Kāhui Kaumātua.

When Dr Tess Moeke-Maxwell (Ngāi Tai ki Tāmaki, Ngāti Porou) approached the late Matua Rawiri Wharemate in 2013 about forming a kaumātua advisory group to provide guidance to the first palliative care research team in Aotearoa, she was overwhelmed by the response.

Matua Rawiri – who bestowed the research team’s name Te Ārai, meaning the veil between life and death – soon had kaumātua lining up to join. Many were concerned that whānau were losing their traditional caregiving knowledge and tikanga (customs) at the end of life, especially as kaumātua were passing away and their younger people had moved to the cities or overseas for work. There was also concern that palliative care services in Aotearoa only reflected Western values of a ‘good death’.

With the advice and support of the Te Ārai Kāhui Kaumātua advisory group1, Dr Moeke-Maxwell and the Te Ārai Palliative Care and End of Life Research Group2 she co-founded with Professor Merryn Gott at the University of Auckland’s School of Nursing began a large body of research that has helped improve palliative care, end-of-life and tangihanga (rites for the deceased) experiences for Māori kaumātua and whānau throughout Aotearoa.

Now the outstanding contribution of Dr Moeke-Maxwell and the Te Ārai Research Group has been recognised with the Health Research Council (HRC) Te Tohu Rapuora Medal at the Royal Society Te Apārangi Research Honours event in Hamilton this evening.

HRC Chief Executive Professor Sunny Collings says that Dr Moeke-Maxwell has led or supported numerous studies and community collaborations with her Te Ārai colleagues and kaumātua that have put whānau aspirations and tikanga front and centre.

“Tess’s research has informed Aotearoa’s palliative care policy, increased Māori access to palliative care, and supported whānau access to knowledge about tikanga processes across the end-of-life pathway, from the time of diagnosis through to the hura kōhatu (unveiling), disposal of ashes, and bereavement,” says Professor Collings.

“Her leadership and research talents, coupled with her clinical counselling background that has involved working across diverse whānau groups experiencing grief and loss, means she is regularly asked to provide advice to the Ministry of Health and national bodies such as Hospice New Zealand. She is also in high demand as an educator and presenter in indigenous end-of-life care both nationally and internationally.”

Dr Moeke-Maxwell has made a significant contribution to key documents that guide palliative care across Aotearoa, including Mauri Mate: A Māori palliative care framework for hospices; Whenua ki te whenua, an advance care planning guide for whānau; and the Foundations of Spiritual Care Training Programme, led by Hospice New Zealand.

The shift to include whānau and family carers as members of the palliative care workforce in the Ministry of Health’s 2017 Palliative Care Action Plan was also informed by the work of the Te Ārai Research Group.

Dr Moeke-Maxwell says the Te Tohu Rapuora Medal is great acknowledgement of the inspiration Professor Merryn Gott had to bring a national palliative care group together and the vision of Matua Rawiri Wharemate and kaumātua to improve Māori end-of-life outcomes.

“The end of life is a tapu (sacred) time when the wairua (spirit) is very active, so it’s imperative that great care is taken in this space. We’ve been privileged to hear some of these wairua-filled, end-of-life rituals, which belong to iwi and hapū,” says Dr Moeke-Maxwell.

She says the traumatic situation some whānau, including her own, found themselves in during the COVID-19 lockdowns when they couldn’t carry out or attend proper tangihanga of loved ones who had passed away showed there are still gaps in our knowledge though.

“How do you do end-of-life caregiving and dying during pandemic situations? I took this question to our group because I knew how hard it was for my whānau – how did others cope and adapt their customs to get through this? We’re currently disseminating the findings from our study on this, which we hope to share not only with whānau but also with the government to help influence future pandemic policy development. Our participants have requested that the government hold a national memorial day to acknowledge all New Zealanders who had someone die during the lockdowns.”

Recently Dr Moeke-Maxwell completed the HRC-funded Pae Herenga project, which examined the traditional end-of-life care customs used by kaumātua and their whānau and their experiences using their tikanga in different healthcare settings. She says the resources and digital stories from this project3 are a taonga for Māori whānau and health professionals.

“Often whānau care for a loved one at the end of life at great cost. They give up work, they might use all the savings in their bank account or even go into debt. But whānau tell us this was not a burden and that they would do it again. That is aroha (care, compassion), manaakitanga (respect and caring), and wairuatanga (spirituality), all those beautiful values that we have which take priority over the sacrifices. The word whānau use to describe caregiving is ‘privilege’ – it’s a privilege to serve our sick and dying in that way.”