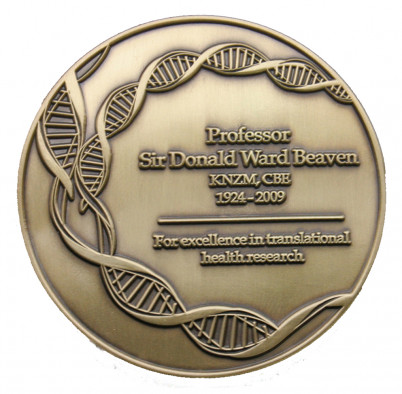 The Beaven Medal was established in 2010 to recognise excellence in translational health research, that has had high impact on clinical practice and patient health. The medal commemorates the work of the late Professor Sir Donald Ward Beaven and his interest in translating research into the clinic, as part of the pathway to positive health outcomes.

The Beaven Medal is for an individual or research team who best demonstrate over their career translation of research into clinical practice; knowledge mobilisation; engagement with community and providers of clinical health care; and a commitment to making a difference to the health outcomes and lives of patients.

Nominations are now called for the 2022 Beaven Medal and should include:

The 2022 Beaven Medal will be presented at a Research Honours Aotearoa Dinner held by the Royal Society Te Apårangi in the latter half of 2022  Accommodation and transport will be arranged for the recipient and partner (or two representatives from the team). Nominations close at 1pm on Monday 2 May 2022 and should be directed to Dr Katie Palastanga via email at kpalastanga@hrc.govt.nz. If nominating a colleague, nominators must inform the nominee of the outcome.

2021 - Professor Lesley McCowan and team from the University of Auckland for their research which identified that pregnant women who went to sleep lying on their backs had an increased risk of stillbirth after 28 weeks of pregnancy, and for the subsequent development of a national public awareness campaign to get pregnant women sleeping on their side to reduce this risk.

2019 - Professor Richard Beasley from the Medical Research Institute of New Zealand received the Beaven Medal for helping halt an epidemic of asthma deaths in New Zealand and going on to change the way the world manages asthma, saving hundreds of thousands of lives in the process.

2018 - Dr Colin McArthur from the Auckland District Health Board received the Beaven Medal for his lead role in several multi-centre internationally-recognised trials that have changed guidelines and practices in intensive care units in New Zealand and abroad.

2017 - Professor Alistair Gunn from the University of Auckland received the Beaven Medal for pioneering the use of mild cooling to treat babies with brain injuries at birth.

2016 -  Distinguished Professor Jane Harding from the Liggins Institute at the University of Auckland received the Beaven Medal for her ground-breaking research into treating babies with low blood sugar levels.

2015 - Professor Ed Mitchell from the University of Auckland/Auckland District Health Board received the Beaven Medal for his ground-breaking research into cot death (now known as sudden infant death syndrome or SIDS), which has saved many thousands of young lives.

2013 - Professor Parry Guilford from Otago University was presented with the Beaven Medal for his outstanding research into stomach cancer.

2011 - Professor Edward Gane from Auckland City Hospital received the Beaven Medal for his research into whether better surveillance can prevent liver cancer and death in Māori with chronic hepatitis B virus (HBV) infection.

2010 - The inaugural Beaven Medal for excellence in translational research was presented to Dr Martin Than, a consultant specialist in emergency medicine at the Canterbury District Health Board, for research that will provide an innovative and workable change to the medical decision-making process for patients presenting acutely to emergency departments, with chest pain, that may be due to a heart attack.

Want to know what the HRC is investing in?

Search our Research Repository to see the research we’ve funded over the past 10 years.